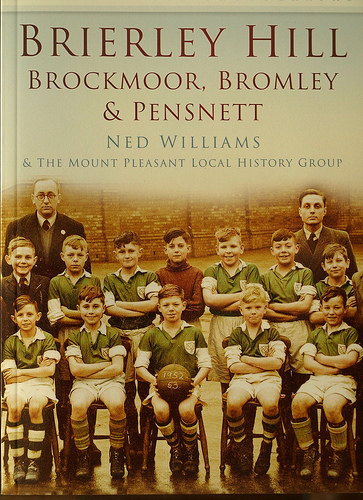 Ned talked to a packed house on local history enthusiasts of his work with Mount Pleasant Local History Group to document and gather photographs of the history of the town.

In fact the task has proved too large for a single volume and the work has had to be split into two parts. The first part, ‘Brierley Hill – Brockmoor, Bromley and Pensnett’ was being published now and a second volume covering the rest of the area is to be published later.

The launch was accompanied by a slide show which triggered many happy memories for the audience with a picture of the old Pensnett Forum cinema being greeted with a sudden mass murmur of recognition. Who would imagine it, Pensnett with its own cinema!

On a sadder note Ned commented that he had included a picture of Pensnett School, due to close in the next few weeks, as it will soon be part of the history of the area.

Perhaps the most surprising element of the talk was the fact that the missionary who converted Tonga to christianity, John Thomas, is buried in the church yard at the methodist church where the event was being held.

Guest of honour at the event was Stan Hill was has himself published a number of excellent books on Brierley Hill, and the master of ceremonies was Kevin Gripton of Brierley Hill Methodist Church and Brierley Hill Community Forum who had the honour of receiving the first official copy of the book.