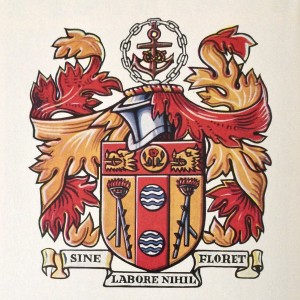 One of the hard decisions the ‘doers’ at Friday’s meeting (15th November) had to take is what colour scheme to adopt for the flowers to be planted for next May.

In the end it was decided to take the colours from the town’s coat of arms.

The 1959 Brierley Hill Handbook described the origin of the arms:

The Arms (which are assigned to the Council by letters patent dated 19th June, 1942) combine representations of the local industries and the Arms of King’s Swineford (Kingswinford).  The glass, iron and steel and fireclay industries are denoted by the two beacons.  The boars’ heads are the “King’s Swine” and the two circles in the centre across which run wavy lines represent the fords adjoining the ancient minor of “Suinesford” by which swine crossed from the manor to the waste lands beyond.  The rose represents the briar rose which used to abound around the hill from which the district derives its name (Brierley Hill).  The knot is, of course, the Stafford Knot.

The motto is “Sine lahore nihil floret” – without labour nothing flourishes.