On being honoured by Brierley Hill District Council in September 1917, Lance Corporal Stanley Harley modestly accepted a gift of a watch.  He didn’t give a full story of his achievements though – this would have been a breech of duty given the secretive nature of war.

Following the war a book “The Worcestershire Regiment in The Great War” by H. Fitm. Stacke was published. The volume is available to view in the reference library in Stourbridge. It gives details of the “Action of Bouchavesnes” on 4th March 1917 where Harley won his medal.

As dawn broke (5.30 a.m.) on March 4th the British artillery opened a barrage fire. The opening crash of the bombardment served as signal (This was a variant on the usual method of synchronised watches) to the battalions detailed for the attack, and all along the front of the British trenches troops swarmed out and poured forward in a series of waves. The 1st Worcestershire were in the centre of the attacking line, with the 2nd Northamptonshire on the left. The right flank of the Worcestershire was on the road from Bouchavesnes to Moislains; south of the road the 2nd Royal Berkshire continued the front of attack.

The attack was immediately successful.

The German front line,”Pallas Trench,” was easily overrun and the attackers swept onward to their further objective, “Fritz Trench,” the German second line.

There was a short but desperate struggle. The enemy resisted to the last, but the attackers were not to be denied.

For a few minutes a German machine-gun held up the onslaught, but the gun was rushed and captured by a party headed by Sergeant T. Guest. Sergeant Guest was awarded the D.C.M. for his actions.

Within a quarter of an hour from the start “Fritz Trench” had been secured.

In many places the trench had been so battered as to be unrecognisable; the attackers passed over it and pushed on down the slope to “Bremen Trench,” the enemy’s third line.

There they bombed dugouts and roped in prisoners until it was realised that our own shells were falling closely around. Recognising from this that they had gone too far, those foremost of the victors fell back and rejoined the main body of the Battalion, who were busily working to prepare the captured positions for defence, under the personal direction of Colonel Grogan.

The Colonel was everywhere, controlling the dispositions and the entrenchment, inspiring all by his own cheerfulness and courage. Colonel Grogan was awarded the D.S.O. for his gallant leadership.

From “Fritz Trench” good observation could be obtained over the whole of the Moislains Valley. The captured position was in fact very important, and the whole weight of the enemy’s artillery and infantry was at once thrown in to regain it.

The work of consolidation was continued under an ever increasing bombardment from all directions, and soon the enemy commenced a series of violent counter-attacks. Most of those counter-attacks were made against the flanking Battalions and a fierce bombing struggle raged all the morning around “Fritz Cut,” immediately to the left of the Worcestershire line; but presently the enemy began to dash forward in increasing numbers up the open slopes.

The Worcestershire platoons opened a hot fire. Lance-Corporal F. H. S. Harley, in particular, did notable execution with his Lewis-gun, and the remnant of the attacking enemy were driven to cover. L/Cpl. Harley was awarded the D.C.M.

All day the enemy’s shells beat against their lost trenches, but by nightfall “Fritz Trench” was securely in our hands and the firing died away.

Later the 2nd West Yorkshire came up to take over the captured ground, and the 1st Worcestershire, weary but triumphant, tramped back to “Asquith Flats.”

Further details can be found at http://www.worcestershireregiment.com/bat_1_1917.php 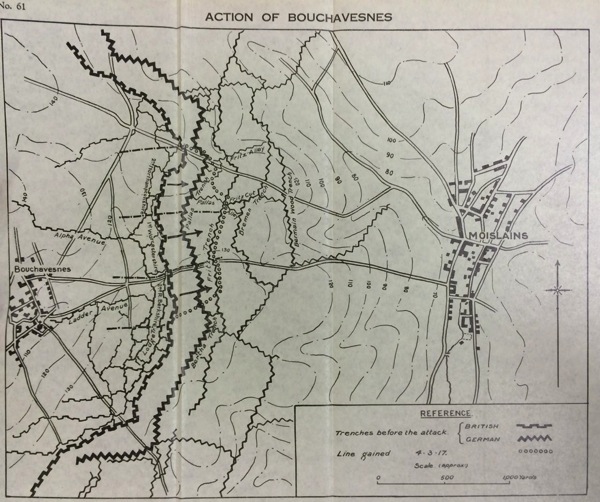