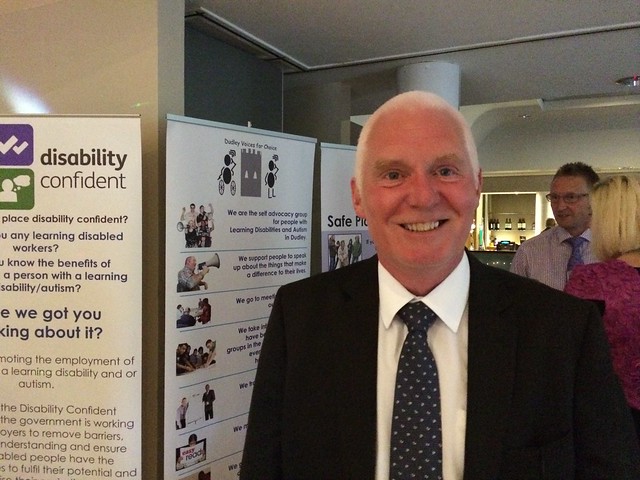 It was good to bump into Mike Crannage at last night’s Dudley Voice for Choices launch. Mike is the mayor’s attendant and so I know him from my Dudley Council days. You may have read about Mike before for such activities as shrugging off venomous snake bites and scaling volcanos whilst crossing the Costa Rican jungle or racing 155 miles through the Sahara desert or braving “driving winds and temperatures of minus 30 degrees celsius hiking across the frozen wastelands of the Arctic.”

But what I hadn’t realised about this contemporary Crocodile Dundee is that he is a Brierley Hill man: born in the Delph. So inevitably we fell into conversation of Mike’s childhood.

Mike remembers seeing the Chapel Street flats being built in the mid-sixties and his family were the first occupants of a third floor flat at Chapel Court.

Over the years I’ve heard many negative comments about Chapel Street. Even from the beginning they were controversial – with the decision to build flats rather than houses being taken on the casting vote of the then chairman of Brierley Hill Council, Tommy Wells.

Mike had a different perspective:

“We were really looking forward to moving. The flats were much better than what we were living in.”

“It was interesting when the ice cream van came though. We’d shout up to mum for some money. By the time the coin she threw down landed it was going as fast as a bullet!”

The conversaton with Mike got me thinking.

I’ve heard other positive stories about living in the flats too.

Cllr Margaret Wilson lived in Burnham Court and then for many years at the top of Chapel Court. She loved living in the flats and would wax lyrical on the expcetional and breathtaking views she enjoyed.

This isn’t to be naïve on the issue. Of course there are problems with High Rise living.

But I wonder how many of these are attitudinal, and not just amongst tenants either.

When I was elected as a councillor (in 1983) I wanted to promote more engagement between the local authority and the local community. It was therefore a pleasure to be involved with was the forming of Nine Locks Community Association.

The residents were keen to improve the estate. They made a suggestion. Would it be possible to have maps erected so visitors could find the address they were looking for instead of having to go from block to block searching for the right one?

When I put this highly reasonable and, I felt, sensible request to the housing manager he was unequivocal.

“No. They will just be vandalised.”

To my horror he then continued:

“I tell you what I am willing to do though. Put steel doors on the entrances.”

I was horrified. This would be the very worst thing to do.

Fortunately the director of housing, Mike Summerfield was much more enlightened and, over the years. a lot of good work was done to involve tenants and improve the area. But the bad attitude and perception displayed by the housing manager could have resulted in a catasrophic no-go area being created.

There’s something about blogging about Brierley Hill.

After writing that first paragraph about Mike’s tremendous and amazing achievements in the Sahara, the jungle and the artic – which have raised thousands of pounds for charity – I started the second paragraph with:

What? As if being born in Brierley Hill was more interesting than Mike’s achievements!!!!

Sometimes I feel I need to get a life 🙂