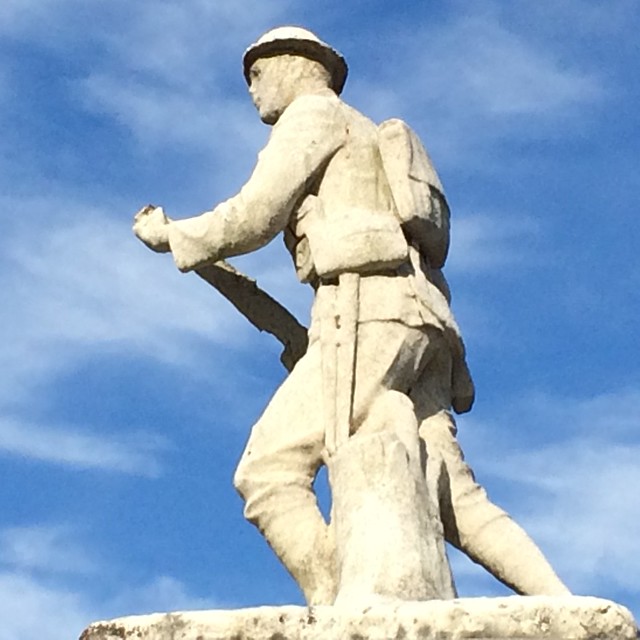 It’s good to see some work has been done to replace the bayonet on Brierley Hill war memorial as well as painting some of the rails adjacent to it.

Recently Wordlsey School indicated that they would like to adopt the memorial as their commemorative project for the Great War. One idea is that their students could raise money to restore it over the next four years whilst the commemorations are taking place across the country.

Two weeks ago we had a meeting with the council’s conservation officer at the Memorial.

The figure of a soldier on top of the memorial is looking tired to say the least. This was made from Sicilian Marble and has struggled to stand the test of time. It is, after all, located in one of the most exposed positions in Brierley Hill.

Of the four scenes depicted beneath the figure, one on each side of the memorial, three are in fairly good condition. But the one depicting the sinking of the Arethusa and the rescue of German sailors is in very poor condition. If you didn’t know what the scene was supposed to be you’d never guess.

All of which resulted in a fascinating discussion about what ‘conservation’ and ‘restoration’ actually meant.

Is it best, for example, to commission a copy of the original panel as a replacement and store the original elsewhere? Or is it better to coat the panel with a chemical to prevent further deterioration? Or should we leave it to weather with time and produce interpretive materials instead?

And then…who is it who should decide?

In the end we thought it would be best to meet in September to determine a way forward and perhaps to hold a town meeting. Watch this space.