The good news is that they have been commissioned by the Office of Public Health in Dudley to run four walks along Brierley Hill Canal to demonstrate the contribution walking makes to helping us feel good.

The walks will take place on Thursdays 2nd, 9th, 16th and 23rd October. They will start at the statue of John Northwood, near to the Marks and Spencer/Argos entrance at Merry Hill, at 10.30am and finish around noon.

I’ve had the good experience to have been on one of Fran and Vicki’s walks before – in Cradley Heath – and found their local knowledge fascinating. So I’m happy to recommend this if you’re free on any of those Thursdays. Booking and other information are in the flyer below. 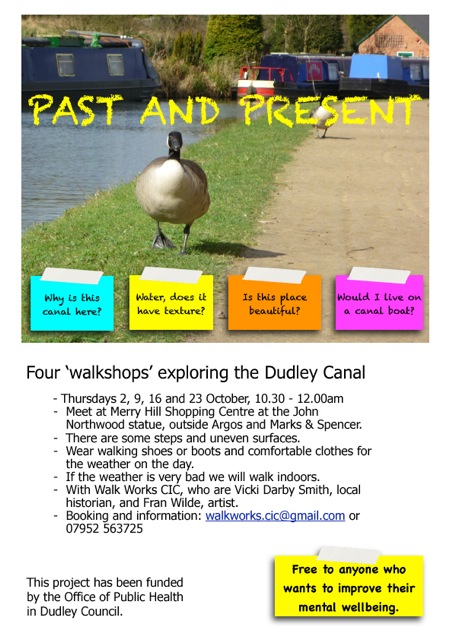 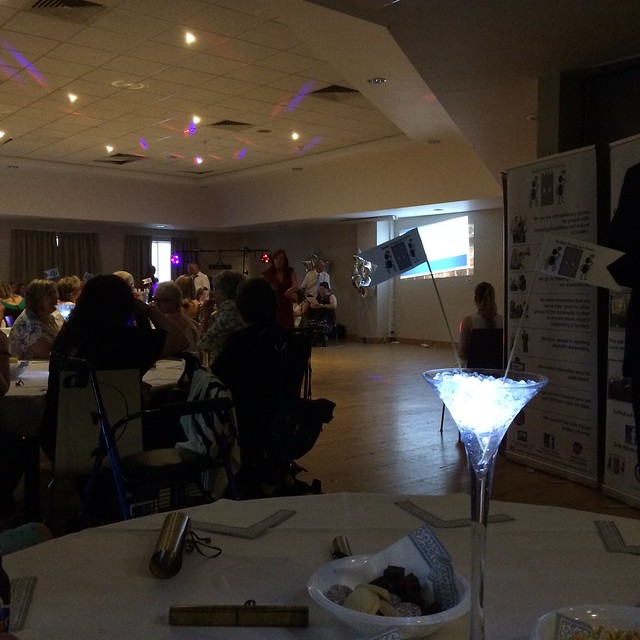 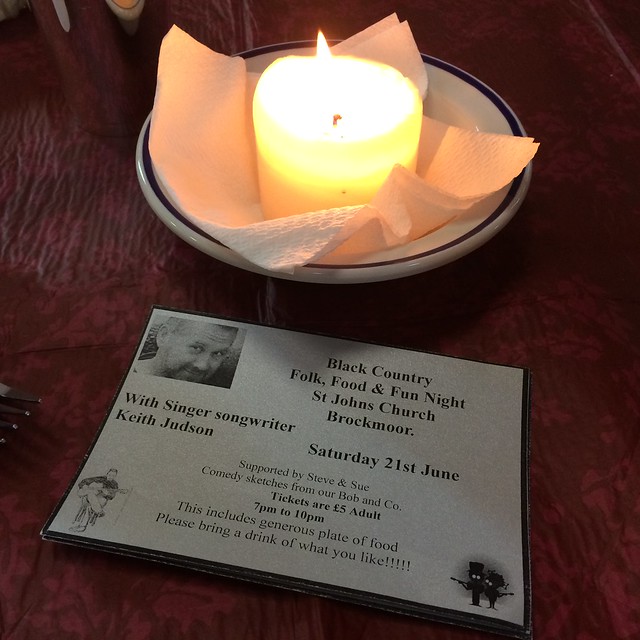 I’ve been to Symphony Hall, the NEC, The Albert Hall, West End theatres…all at great cost. Yet a £5 Black Country Folk, Food and Fun evening at St John’s Church Brockmoor gave me as much pleasure and enjoyment. I do hope these evenings become a regular event. Steve Martin and his wife Sue provided the warm up act – choosing songs well know to all – getting everyone to join in and sing along from the start. Bob and Pam provided the comedy – as good as Aynock and Ayli – and the star turn of the evening was Keith Judson who sang his own compositions accompanied by his own extraordinary guitar playing. Particularly moving were Keith’s songs about the impoverished nail makers of Bromsgrove and the Black Country working under terrible conditions – white slaves – and ironically making the shackles and chains for the black slaves of Africa, and a composition dedicated to his late mother and father. 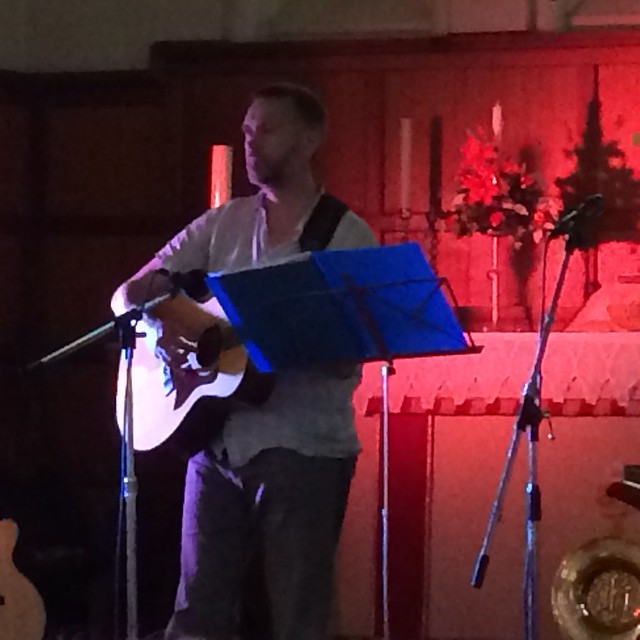 At the interval food was brought to our table – no queueing – which included a sweet too. St John’s provided an excellent venue. The accoustics were really good, its historic setting provided a special atmosphere for the night and the performance space was ideal. Churches need to move beyond the traditional church service to find new uses to complement their use as a place of worship and to ensure their continued viability into the future. Events like this point the way to how it can be done. 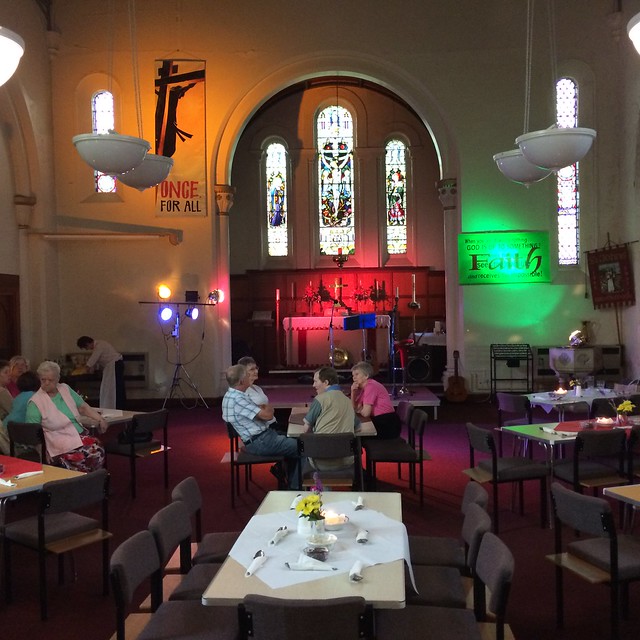 So many thanks to all involved. A great evening was had by all. Finally here’s a youtube on an impromptu dance to give you flavour of the atmosphere. (NB sound quality due to the fact this was recorded on my iphone – doesn’t do justice to the live sound at the event).

I am writing to invite you to the next meeting of Brierley Hill Civic Society which will take place on Monday, 16th June 2014 at St Michael’s Church, Bell Street South, Brierley Hill commencing at 5.30pm.

Our main speaker this meeting is Jayne Pilkington who will be talking on:

“Conserving the Heritage Assets of the Borough: a Conservation Officer’s Perspective”.

Jayne is the remaining member of the Conservation team in Dudley and I am sure that she will have lots of interesting things to say.

The agenda for the meeting will therefore be:

END_OF_DOCUMENT_TOKEN_TO_BE_REPLACED 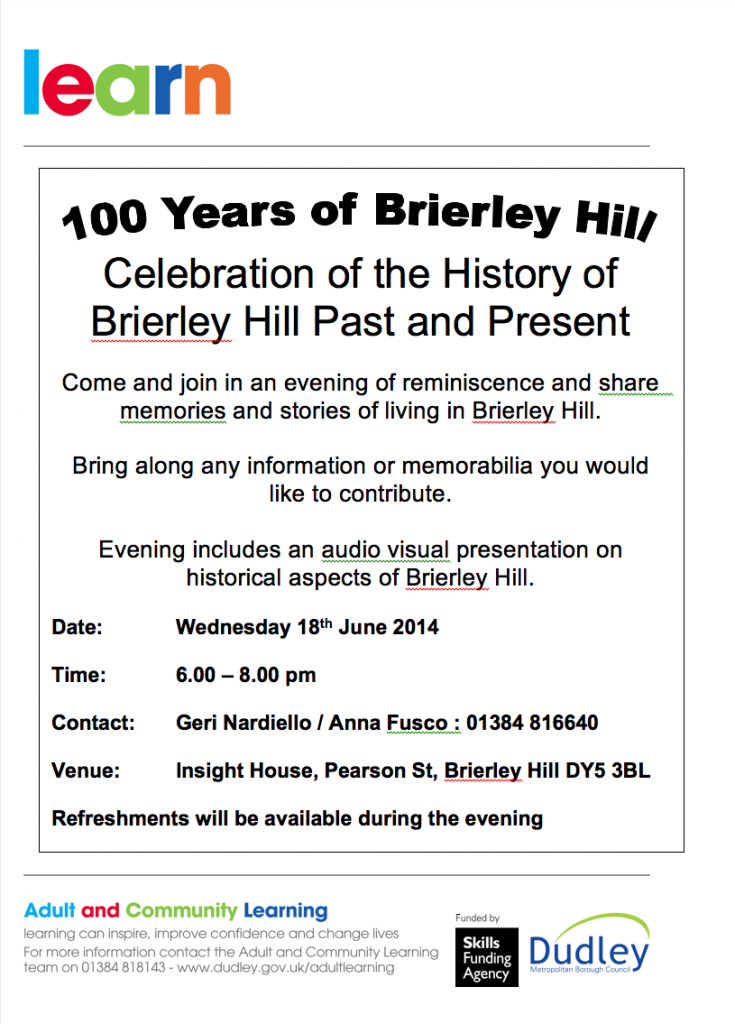 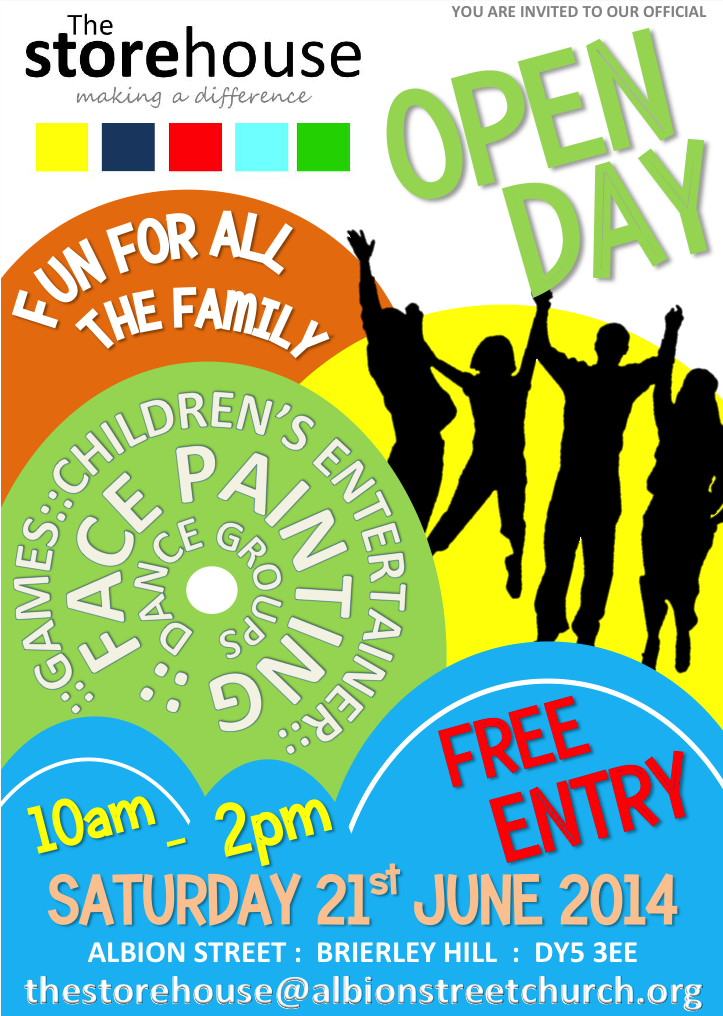 An appeal is going out for residents, community groups, schools and business to support their town by becoming ‘bloomers’  and adopting one or more of the planters which will be brightening up Brierley Hill this summer.

The Brierley Hill in Bloom project has won support from the the High Street Traders Association and the government’s Community First initiative to purchase planters to be placed on the roadside barriers radiating out from Five Ways.

Other partners have offered their support – including Birmingham Metropolitan College, Brierley Hill Market, The Civic Society, Dudley MBC, Dudley CCG and Insight House – and a plan has been put together to deliver the scheme.

Students on the College’s horticultural course are already growing the plants. 26 planters are on order as part of phase one of the scheme and it is hoped that the first displays will be up in time for St George’s Day on 26th April.

But now organisers are looking to extend community involvement by asking for help in maintaining the plants when they are in.

“The initial partnership approach to the scheme has been really heartening.  Building on the success of the Brierley Hill Christmas Festival there is a real will to support our town.  What we need now is support from businesses, individuals, schools…anyone who wants to make a difference. We want them to become our ‘bloomers’ people willing to adopt one or more planters to make sure that they are properly watered and looked after.  It would also be terrific if we could identify bloomers who want to grow some plants to contribute to our next display this autumn.”

For anyone who would like to get involved then please email bloom@brierleyhill.org and further information can then be provided. 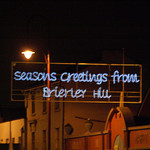 Subject to change, here is the planned musical and dance activities for Saturday’s Christmas Festival and lights switch on in Brierley Hill.

With schools, bands, ukeleles, DJs, dance bands…we’re hoping it is going to be a fantastic occasion.

Many thanks to everyone involved for such a fantastic effort. 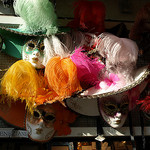 Why not spend a bit of creative time?

Drop in to do a free mask making session at Brierley Hill Library.  Who knows this could start you on a career like the famous mask makers of Venice (pictured)!

There is no need to book and all materials are provided.

You could wear your new mask to do the Panto Trail!

An adult must accompany children for this activity. 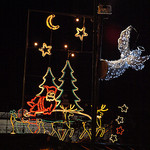 Do you usually go for full on lights at Christmas? Are you a business or a residence in Brierley Hill, Brockmoor and Pensnett? If so, this could be the competition for you!

Applications can now be submitted up to noon on Friday 13th December.

To enter you can send an email to brierleyhillxmaslights@outlook.com or you can pick up a entry form from Brierley Hill Library and post it in the post box located there.

A panel of Judges will visit all the locations on the afternoon and evening of  Friday 13th December. with prize winners announced the next day (Saturday 14th) at: