This week’s release of employment data makes grim reading for Brierley Hill and underlines the case for greater efforts to regenerate the area.

Those claiming Jobseeker’s Allowance (JSA) amount to 8.7% of the population.  This is two and a half times the national average (3.5%) and well above the borough figure of 4.9%.

Year on year that’s an improvement of just 0.1%. 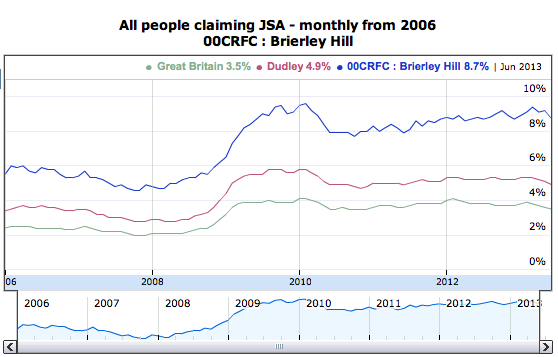 For men the figure is worse – 11.5% are on JSA.  The equivalent figure for women is 5.9%.  Both are well over double the national average.

Almost one in four (24%) of ward residents are in receipt of DWP benefits.  This includes Job seekers, ESA and incapacity benefits, lone parents, carriers, others on income related benefits, disable and bereaved. 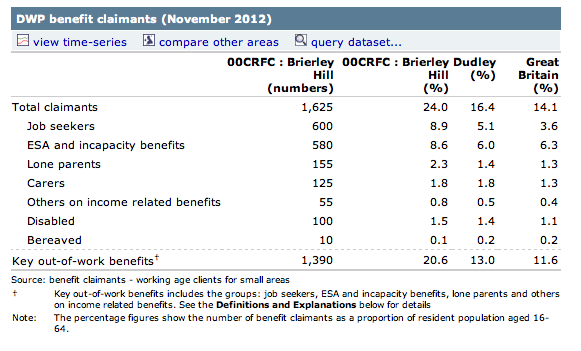 Brierley Hill is the third most disadvantaged ward as measured by benefits out of twenty four across the borough.  Only Netherton and Woodside, and St Thomas’s ward have worse figures.

There is a significantly greater number of people on JSA (40.6% of claimants) for over twelve months than in the borough (36.1%) and nationally (29.6%).  This figure suggests that long term unemployment is a serious problem locally.