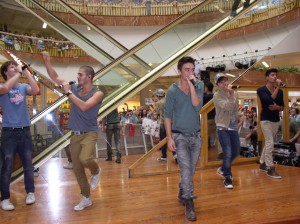 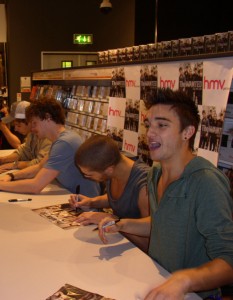 HUNDREDS of screaming fans brought Merry Hill to a standstill on Tuesday 27 July as they tried to catch a glimpse of up and coming boy band The Wanted.

The five-piece group – made up of handsome fivesome Max George, Siva Kaneswaran, Tom Parker, Nathan Sykes and James McGuiness – were at the shopping centre to perform three tracks, including their debut single All Time Low, which was recently released.

The boys, who are being tipped for stardom, also sent hearts aflutter for many teenage girls, as they signed copies of their new CD at HMV.

Kelly Reed, marketing manager at Merry Hill, says: “We were so excited to have the band here at Merry Hill and after seeing them perform, we think they’re going to be huge. There were hundreds of girls queuing up around the centre to meet them and everyone absolutely loved them.

“They released their single at the start of the week and it’s already topping the iTunes charts, so it was great to have them playing here.”