A MERRY Hill fish and chip shop is set to feature on TV tonight, as Harry Ramsden’s chief executive goes undercover to discover what really happens on the shop floor.

As part of channel 4 programme ‘Undercover Boss’, viewers will see Marija Simovic (pictured) – the CEO of the world’s most famous fish and chip shop chain – change her name and don an elaborate disguise to take on various trainee roles in the company’s store, as new recruit Millie Percy.

Marija, aged 39, is the only female CEO featured in the hit series and the business’ new owner has tasked her with restoring the much loved chain to its former glory.

She said: “Harry’s is a British institution and I’m determined to put it back on the map. “It was nerve-wracking going undercover but the whole experience has really opened my eyes to exactly what needs to be done.

“It’s not going to be easy. But what impressed me the most was our wonderful workforce, many of whom have been with Harry’s for decades. Whilst undercover, I learnt so much from the manager at our store in The Merry Hill Centre, as you’ll see in the programme – in fact, their expertise is now being applied across the group.”

Viewers will see an emotional conclusion to the programme as Marija reveals her true identity to shocked staff and rewards the unsung heroes encountered on her journey, including the Merry Hill branch manager.  Photo credit: Stoubridge News 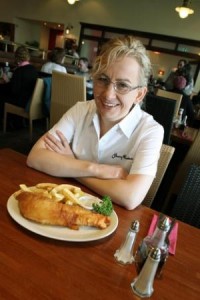