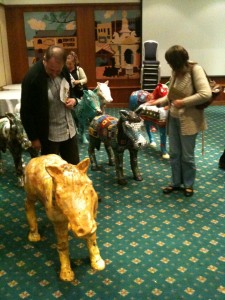 Over £2,300 was raised at the Pony Trail auction held at the Copthorne Hotel on Monday evening (4th October).

Schools which had participated in the project had been given first option to buy back the ponies and some twenty took up that option, leaving nine ponies to be actioned on the night.

Some thirty hopeful attendees bid from £150 to nearly £400 in the auction which was hosted by tv auctioneer Will Farmer.

All money raised will go towards further regeneration projects within the borough.

Many felt sad to see the ponies depart at the end of a project which brough smiles to thousands of local residents.