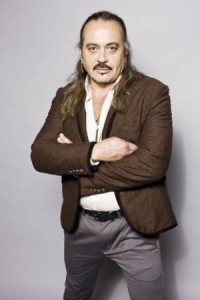 The campaign is on to get Dudley’s X Factor star Wagner to win the TV talent show and to make it to the top of the charts this Christmas.

The 54-year-old Pensnett performer was voted through by fans on last Sunday night’s vote off show after racing through an energetic medley of Spice Girls’ hit Spice Up Your Life and Ricky Martin’s Livin La Vida Loca on Saturday’s ‘guilty pleasures’ themed show.

Judge Cheryl Cole was lost for words after the routine – which saw Wagner accompanied by an array of scantily clad female dancers. While Simon Cowell criticised judge and mentor Louis Walsh’s song choice.

But loyal fans lapped it up and are now on a mission to get the Brazilian born singer from Blewitt Street through to the final and to steal the coveted Christmas number one slot.

Long-time pal Jay Lalsheta, who works at Dudley Leisure Centre, said: “Wagner is a total legend. I would love him to win the X Factor.

“The man has such a kind heart and oozes charisma. He is very special and once his operatic voice comes into play, you will see the true X Factor winner. We really need everyone to vote for him.

“He is totally overwhelmed by the support and love the public in the Midlands is giving him and has promised to work even harder this week in response to the affection people have shown.”

A campaign on the social networking site, Wagner to win X Factor, has already attracted more than 4,000 supporters.

One contributor wrote: “If you just fancy a really crazy Xmas number 1 this year… vote Wagner!!! If you despise all what the X Factor stands for, vote Wagner!”

The twice divorced Black Country karate instructor had reportedly resigned himself to being axed on Sunday after he allegedly slated the show as a set-up in an answer phone message leaked to the press.

But fans rallied round and voted him through, sparing him the dreaded sing-off which saw soulful John Adeleye booted off after the judges opted to save University of Wolverhampton student Treyc Cohen.

Controversial Wagner, who has taken a shine to fellow over 28s contestant Mary Byrne, is now gearing up for his fourth live performance on the show – although the long-haired ladies’ man is reported to have had his wrists slapped by programme-makers over claims by female contestants and a make-up artist that he was being too touchy-feely.

Flamboyant Wagner, however, has put his behaviour down to Brazilian exuberance.

While friend Richard Nock, from Quarry Bank, said: “I don’t believe the stories about him groping contestants. He is a ladies’ man, but not like that. He’s a touchy person, but not a groper.”