The Black Country that photographer Brian Griffin knew as a boy was the industrial powerhouse of the nation. He returns to find out how it has changed

View a gallery of his images here 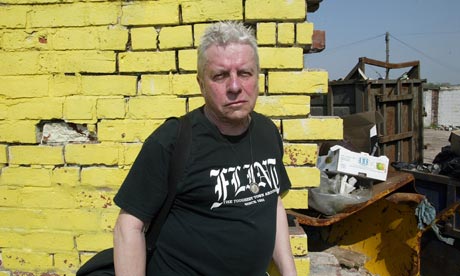 Griffin used the ‘sights and sounds of heavy industry’ as inspiration for his latest exhibition. Photograph: Diensen Pamben/News Team International

Chalked on the side of a forging machine at one of the few surviving chainmakers in Cradley Heath are five words that speak volumes: “Black Country spoken, English understood.” The towns to the north and west of Birmingham, such as Sandwell and Dudley, have a dialect that can be incomprehensible even to visitors from other parts of the West Midlands. That way of speaking was part of a way of life – an insular, distinctive culture forged in the white heat that produced the black soot, which bestowed those towns with their collective name.

Once dubbed “the workshop of the world”, they were still regarded as the industrial powerhouse of the nation when the photographer Brian Griffin, 63, was brought up amid fiery skylines and smoky aromas at Lye, a couple of miles away from the forge where we are watching through safety goggles as huge weights crash down on to molten metal. He now lives with his wife, Brynja Sverrisdóttir, a former model from Iceland, in London’s docklands surrounded by those who earn their substantial living in the new powerhouse of the British economy, the City.

Griffin spent seven months researching his latest exhibition, The Black Country, currently showing at the New Art Gallery in Walsall after opening at the Collège des Bernardins in Paris, which part-funded the exhibition. “Having seen my pictures of the high-speed rail link to St Pancras, they wanted me to do something on work,” Griffin explains. “Where better to do it than the place where I grew up, surrounded by the sights and sounds of heavy industry?” The exhibition is a reminder of how local history can be imaginatively celebrated at a time when library and museum services are being slashed.

Next year the exhibition is bound for a photographic festival in Beijing. “It’ll be nice to send something back to China after everything they’ve sent us,” he says, wryly reflecting on the new realities of Britain’s industrial landscape. The Black Country has never recovered from the massive loss of jobs that followed decisions taken in the 1980s to refocus the economy on the financial, commercial and retail sectors while importing goods from countries with low labour costs. The exhibition includes a black and white photograph that Griffin set up in 1985 entitled The Death of Manufacturing. A derelict factory is surrounded by rubble, at the centre of which is a skeletal sculpture holding a piece of stone in the manner of Hamlet addressing Yorick’s skull.

More than 138,000 manufacturing jobs were lost in the region between 1998 and 2010. By September last year, the percentage of those claiming jobseeker’s allowance in Sandwell was more than twice the national average. Unemployment among 16- to 24-year-olds was running at 33.7% compared with the national average of 19.2%.

The consequences for wellbeing and social cohesion of more than 25 years of industrial decline are not difficult to imagine. Take obesity levels, for instance. A few months ago, figures released by the Association of Public Health Observatories showed that 29% of adults in the West Midlands are obese, nearly double the UK average. According to Dr John Middleton, director for public health in Sandwell: “There is a direct link between economic recession and health.” Middleton adds: “In the era of heavy industry a high-calorie diet was necessary. The jobs went but the diet didn’t.”

Certainly, you would need a fair amount of sustenance to cope with the sort of work that Griffin and I are observing at the forge run by Solid Swivel, one of the companies to survive by niche manufacturing. It was founded in 1910 and employs about 60 people. Men are making chains and anchors for the Royal Navy in conditions that their fathers and grandfathers would recognise. The heat is intense. Sparks fly. The clamour of hammers and heavy weights falling is loud enough for artist Luke Perry, whose father is Solid Swivel’s managing director, to hand us earplugs and goggles. “That’s something they never had in my dad’s day,” says Griffin, whose father bored holes in steel at a foundry a mile or so from here. He died at 66, 18 months after retirement, his lungs lined with the metal dust that he had inhaled all his working life – a reminder that life could be short and brutish in the “good old days” of full employment.

Perry, 27, is as aware of that as Griffin. He runs Industrial Heritage Stronghold, which raises money to fund public art honouring the unsung heroes of the Black Country. He is currently planning a statue dedicated to the memory of Mary Macarthur, who led the women chainmakers’ strike in Cradley Heath in 1910. Griffin, meanwhile, has dedicated his exhibition to women, such as his mother, who not only ran homes but also took menial jobs to help balance the family budget. His take on the women chainmakers is an evocative photograph of Perry’s fiancee, Natalie Gore, posed at this forge while holding a white-hot link of chain in a pair of tongs. Gore is also an artist who designs and makes ornamental chains on a much smaller scale at a studio nearby. The reality is that very few women would be able to handle the heavy ships’ chains made here for any length of time.

There is a certain macho pride in being able to do it, Perry points out. “They like to be able to say that they do a man’s job.” Most are in their 40s and 50s, however. Young men are notable by their absence.Perry has taken to approaching groups of youths on street corners to interest them in their industrial heritage, engaging them with quick-fire drawings of his sculptures and statues. “It takes them off guard and it is possible to get them interested in their heritage,” he says. “Certainly, we’ve never had any graffiti problems.” No inquiries about jobs at Solid Swivel either? “Well, there’s a huge void round here where the work ethic used to be. There’s so little hope in these small towns. The youths can’t see where anything is going. Even graduates are taking jobs in call centres and shopping malls.”

It was rather different in 1972 when Griffin emerged from Manchester College of Art, aged 24, having become a mature student after a few years as a trainee draftsman in Birmingham. He had been the only one in Stocking Street, Lye, to pass his 11-plus; the only one to escape the prospect of a lifetime in factory, furnace or forge, much to his parents’ pride and relief. But before heading for London, he worked for a few months at the Round Oak steelworks in Brierley Hill to earn some money.

“Just before they pulled it down, I used it as the backdrop for the cover of Depeche Mode’s [1984] album Some Great Reward because I wanted to give it a bit of status,” he says. “When I opened my bedroom curtains as a boy, the night sky would be glowing red from its furnaces.”

He pulls a face when I ask him what he thinks of the post-industrial surroundings. “There were brickworks and rolling mills along here,” he reflects. “Fires were flaring and men were stripped to the waist. It was noisy and dusty but at least it was alive. It seems more of a soulless mess now.” Griffin believes that the region has lost the reason for its existence: heavy industry and the way of life that went with it – the dry sense of humour, the “beer boys” bringing jugs of mild ale to thirsty foundry workers, the allotments and smallholdings that made men like his father almost self-sufficient.

We trudge on past half-empty trading estates, boarded-up pubs and scrubby patches of wasteland. At one point we narrowly avoid being run down by a bus heading to Merry Hill, the vast shopping mall built on the site of Round Oak. Again, he pulls a face at the very mention of it. “Bloody awful place,” he mutters. “It’s drained the life out of the shops in Dudley.”

Eventually we arrive at his old home. Or rather what is left of it. A few bricks from the frontage are dominated by a spreading alder tree rooted in the spot where the Griffins used to climb into a tin bath once a week. Only two of the original 16 Victorian two-up, two-downs remain. “And they’ve been DIY-ed up,” says Griffin, eyeing the uPVC doors and windows with distaste. Next door is a modern semi with a sporty looking car on the driveway. A tree in full blossom stands at the bottom of the street where once there was a wall carrying an advert for an enamelling factory. We can hear birdsong instead of hammers, and the current residents have the material possessions and sanitary conditions that Griffin’s parents could only dream about. When I point this out, he shrugs: “It’s ugly, though. There’s no aesthetic any more. There was a wholeness and completeness about it when there was a pub or a chapel on every corner. There were 16 houses in this street and I knew the name of every family. Not that everyone got on,” he adds with a grin, suggesting that what we like to look back on as “tight-knit” communitiesharboured disputes as well as supportiveness and solidarity. Black Country was spoken, but not always acknowledged.

• The Black Country is at the New Walsall Art Gallery until 18 June. Brian Griffin will lead a tour of the exhibition on 4 June at 2pm.