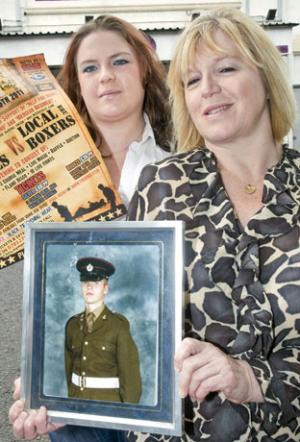 A KIND HEARTED Brierley Hill woman is throwing herself into organising a charity boxing evening in her bid to raise £20,000 for three military groups.

Christine Wyman, of Dell Road, is mum to 21 year-old son James, who is currently on his second tour of duty in Afghanistan in the Bomb Disposal Regiment.

Alongside her 23 year-old daughter Samantha, the pair have organised the charity boxing event on Saturday, June 18 at The Venue in Dudley High Street.

And the Fusilliers will be opening the night after giving up their time for free and special guests will also include a group of amputee soldiers.

All money raised will be split between Help for Heroes, The Injured Soldiers Fund and the Mercian Regiment.

Catering manager, Christine, aged 50, said: “I have been a fundraiser for Help for Heroes for around 18 months and raised quite a few thousand pounds.

“But I began getting to know quite a lot of different regiments and decided to fundraise for them as well, to help support individual injured solders and their families.

“I want to raise as much money for the individual regiments as I can over the next year.”

She added: “People think it has gone quite quiet over in Afghanistan at the moment, but planes are still constantly coming back with injured soldiers on board.

“I wanted to make people aware that they are still out there.”

via Boxing fundraiser for military heroes (From Dudley News).