Emmerdale actor Tom Lister, who plays Carl King, officially opened the new discount store in The Ryemarket at 10am on Saturday November 12.

The grand opening took place two days after the store opened for customers, which will be boost for the town according to Ryemarket manager Karl Taylor.

Mr Taylor said: “The store will be a great addition to the shopping centre and will attract many customers, especially at this time with the build-up to Christmas.

“We look forward to a long and successful association and to working closely with them.” 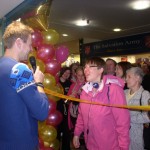 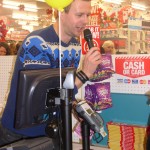