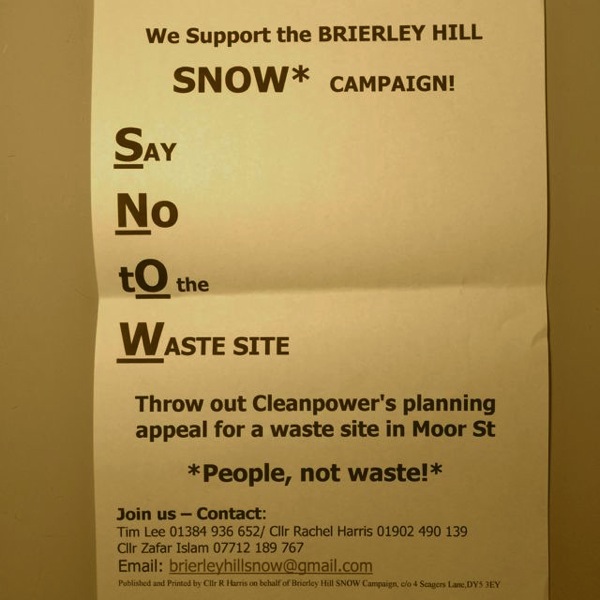 A public meeting has been called to rally opposition to the Clean Power waste site proposed for Brierley Hill.  Residents and objectors have been invited to attend the meeting which will take place at Insight House, Pearson Street, Brierley Hill on Wednesday 26th February.  The meeting will start at 7pm.

Residents and councillors have come together to form the SNOW (Say No tO the Waste site) campaign and to discuss tactics in the light of the Clean Power appeal after the original application was turned down last August.

Campaign posters have been produced, a twitter account (@BrierleyHillSNO) web site (https://sites.google.com/site/brierleyhillsno/) and Facebook page have been established, and posters are being produced to demonstrate the strength of local feeling against the proposal.  A proposal which would bring food waste to within 20 metres of the nearest homes.

“We are hoping for as much support as possible.  The planning inspector will consider all of the planning issues.  We have great concerns about the proximity of the proposal to local homes as well as the prospect of hundreds of heavy vehicles visiting the site each week.”

Ward councillor Rachel Harris agreed at the meeting and stressed how the area had already suffered from the RDF ‘waste  mountain’ which is still the subject of ongoing legal proceedings.

Posters have been produced for local residents.

The Civic Society unanimously agreed to support the campaign and to lend its weight to any representations which are made.

Alternatively email the campaign on brierleyhillsnow@gmail.com