Last year it was revealed that Dudley Council had lost the historic painting of Sg William Jordan’s act of heroism in saving a wounded colleague. The painting was by Francis Gibbons, an artist of some renown who had exhibited at the Royal Academy and had also started the Gibbons and Hinton tile works at Buckpool. Now a trawl through Dudley archives have a revealed and article in The Advertiser of 21st August 1915 in which Sgt Jordan told of the exploits which were to inspire the painting.

It is interesting to compare the scenes depicted in the painting with the words of Sgt Jordan. 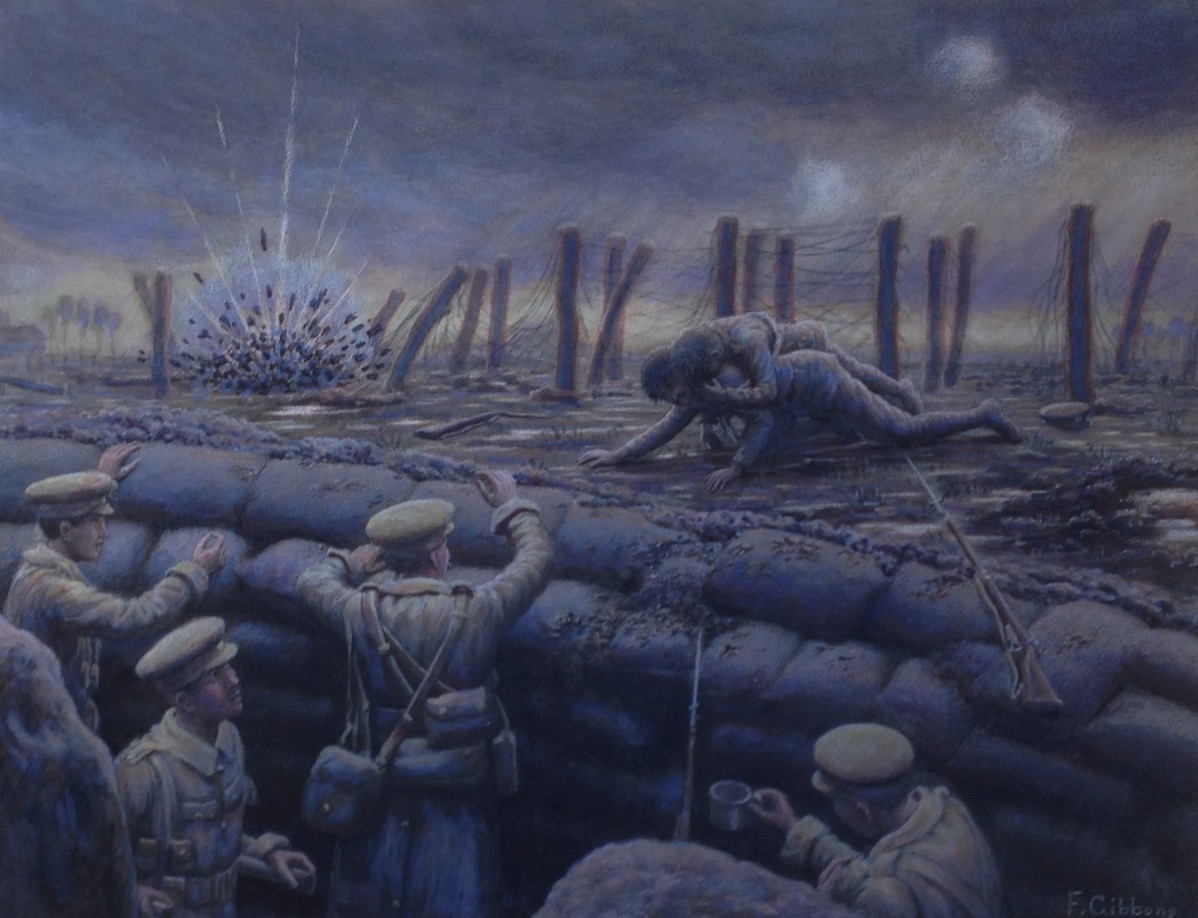 Here are the words of Sgt Jordan:

During the battle of Festubert, which took place on 16th, 17th and 18th of May last, the 2nd Brigade to which I am attached received orders for attack, ands successful were we that the enemy opposite us were completely demoralised and two lines of their trenches fell into our hands.

A flanking movement led by myself was chiefly responsible for this, but whether I was commended for the brilliance of this manoeuvre or for what ultimately happened I cannot say.

It appears that part of the German line had been cut off, and whilst my platoon was in the enemy communication trench we discovered we were being fired at from the rear.

Observations discovered a German maxim gun on the bridge of a trench, and we doubled towards it.

I was then with a Corporal of the Welsh Fusiliers, and on driving the Germans from the maxim gun I tried to break it with my rifle.

We advanced down the trench, and six gas bombs were thrown at the Corporal and me, and I just had time to clap my mouth pad on.

I got a whiff of the gas, and I can tell you it was nasty.

Soon after the Corporal was hit in the head whilst on the parapet of the trench.

After that I held the trench till reinforcements came. Still we bagged about 98 prisoners, and we found fifty in one dug-out. I shouted to the Germans to surrender as soon as I got there, and some threw up their hands but others opened fire.

The were bags of German Helmets in the trenches belonging presumably to the Prussian Guard.

After that we held the 1st firing trench and the communication trench for two days, and we were shelled the whole of the time, our artillery effectively responding. We then made an advance in order to re-build the parapets of the trench, and whilst there we were warned that the enemy were coming to attack us in large numbers. Naturally we had to retire on account of superior numbers.

The Germans hoping to recapture the trenches we had taken, submitted us to a galling fire.

In these trenches lay a poor lad of the Royal Welsh, wounded in three places and who much have been there two or three days.

My officer having been wounded, I was left in sole charge of my platoon, and on Monday, May 17th, with a number of my men, I went into the trenches in search of any equipment that had been left behind.

A lad named Beresford, of Hart’s Hill, was with me, and pointing to something said “That fellow is alive.”

I ran up to him, and after chafing his hands succeeded in getting him round.

The poor lad was wounded in the eye, breast, and leg, and I asked him if he thought he would be able to move.

I began improvising a stretcher in order to carry him to safety, when the Germans bombarded us.

At this juncture I thought our own battalion were attacking again and my captain would be needing me.

But something told me not to leave the lad, so I asked him if he could get on my back, and I would carry him. He said he would try, and as I got him on my should the poor fellow called out with pain from his wounds.

I had to carry him a distance of 500 yards, and in some cases across open ground.

I do not wish to appear egotistical, but I can tell you the task was far from easy, for the ground was all blown up, and the wire entanglements caught my clothing added to which was the danger of being hit any moment, for a regular battle was now raging.

Still, I carried the lad to safety and gave him over to our first Company, where he had something to drink.

So parched and thirsty was he that he drank the tea boiling hot.

He blessed me for what I had done and said he should never forget me.

Nor shall I forget him.

Next day I saw him carried away, and thank God he was still living although I have not seen or heard anything of him since, I believe he would pull through, for he was a cheerful lad.

As soon as I could I quickly found my captain, and he learned the story he said: ‘I am quite proud of you.’

One thing I have forgotten to relate.

Whilst the lad was lying in the trenches a shell carried a part of the trench by him right away, leaving him exposed to fire, and it is a miraculous thin he was not shattered.