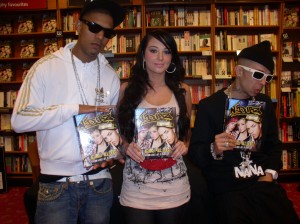 Popular hip hop trio N-Dubz, made up of Dappy, Tulisa and Fazer stopped off at Waterstones in Merry Hill in May.

Hundreds of fans queued for hours to get their book‘Against All Odds – From Street Life to Chart Life’ signed by their idols.

Kelly Reed, Marketing Manager at Merry Hill, said: “We knew it was going to be a big turnout because they are so popular, but even we were taken aback by the crowds. We’ve had some big names at Merry Hill over the years, but N-Dubz seemed to be as popular as anyone else we have seen recently. “It’s great they took the time out to meet fans and there were a lot of happy faces coming away from Waterstones.”