EAR piercing screams heralded the arrival of chart toppers N-Dubz as they performed an exclusive after hours gig at Merry Hill last night.

The hip hop trio – Dino ‘Dappy’ Contostavlos, Tula ‘Tulisa’ Contostavlos and Richard ‘Fazer’ Rawson – performed hits from their two hit albums during a private one hour gig in Fountain Square to 500 excited competition winners. The popular band, who have taken the UK by storm with a number one album and three MOBO awards, sang crowd pleasers such as Strong Again, Papa can you hear me, Number One and an impressive cover version of The Script’s The man who can’t be moved.

N-Dubz returned to the shopping mall to perform the gig after a successful book signing in May, when hundreds of fans turned out to greet the band. Before the concert, Dappy, Tulisa and Fazer spoke to the News about their loyal following and their forthcoming plans.

Dappy said: “We love how our fans give us so much support, we would be nothing without them and It is great to see them sing along with our lyrics.”

The band also spoke about their third album, which is yet unnamed, and is set to be released in November, along with their new single called Best Behaviour, which is due out next month and which the band are filming the video for in St Tropez later this week.

Sisters Emma and Samantha Skelding, from Wordsley, were among the lucky concert-goers and had the chance to get up close and personal with their pop idols when they met the trio back stage. Samantha , aged 14, who has been an N-Dubz fan since they first started, said: “The concert was brilliant and I can’t believe I got the chance to meet them. That was the best bit as I think they are great.”

Emma, aged 11, added: “I was really nervous meeting them, but they were really nice and the concert was great.” Also meeting the band was 14 year-old Becky McGrory, from Liverpool, who won a competition to design the stage backdrop, with her colourful artwork of the trio. 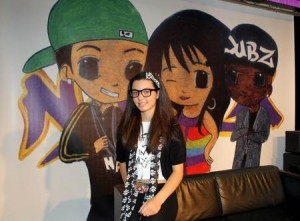