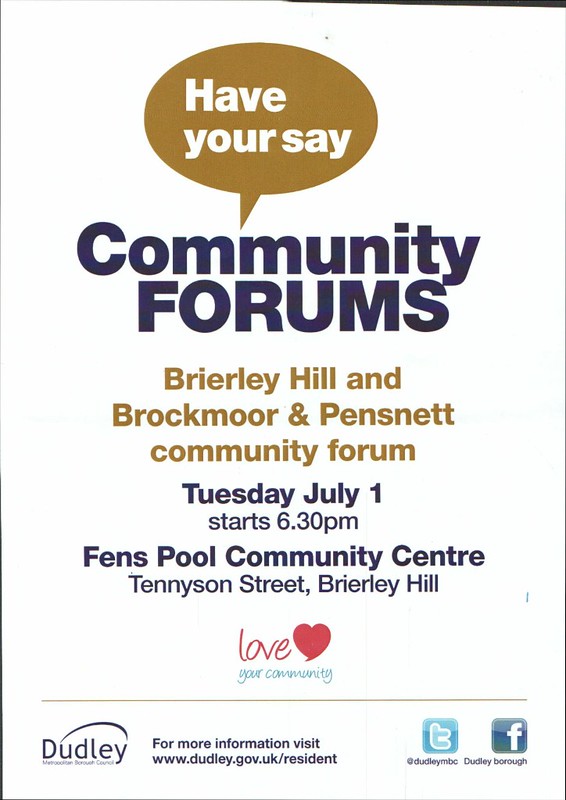 Now that the Environment Agency have sent a circular letter to 700 families, it’s important for there to be a proper public response (else the EA will think no-one cares), so we now need to move with some speed.

This is particularly important, because we think the EA’s information sheet is misleading, by continually referring to plans for an “incinerator”, and virtually ignoring the fact that the plans include an anaerobic digester.

Individual letters of comments/protest to the Environment Agency need to be in by 20 July.

To update you on campaign plans:

a. are the Council aware that residents’ opposition to the plans for the waste site are as strong as ever?

b. will the Council be making comments and representation to the EA. If so, will residents be able to see the draft proposals and provide input?

d. do Councillors have any further plans to oppose this development?

I can’t make that particular meeting, but it would be really helpful if as many as possible (at such short notice) could be there – Cllr. Rachel Harris will be there – could one or two volunteer to ask the questions?

I’ve drafted a letter of objection for individuals and families to sign, and Lorna has volunteered to liaise to organise the deliveries/collections of signed letters. We have a database of core supporters, and we can concentrate on those, and, perhaps, ask them to see if they could get signatures from neighbours and friends, to “cascade” the effort. We can also deliver an update newsletter, making it clear that CP’s plans have not changed.

We’ll get things under way by mid week.

Rachel will have a word with the Indoor Market to see whether they might agree to help as before.

I know that some of us are on holiday about this time, so anyone knows anyone else willing to lend a hand please email/telephone me/Lorna (01384 936 652).

Just to confirm, we need to get the letters to the EA by 20 July, so target date is Friday 18 July – time’s limited, but we’re used to that!

Although they have withdrawn from the Planning Inquiry it appears that Clean Power have not given up their attempt to develop a waste disposal site on Moor Street but are now trying a different route. The permit request covers hazardous waste which is very worrying as it may have  implications beyond the previous planning application (see notification below). Apologies if you are already on the EA circulation list.The core SNOW* campaign committee is meeting this week to consider how we can continue to fight this.Best wishes

Rachel Harris SENT ON BEHALF OF DAVID HUDSONPlease accept my apologies – there was an error in my last email. Theapplication is to process hazardous waste – not non hazardous waste. Pleasesee revised email below. Dear Cllr HarrisYou may be aware that we have received an application for an environmentalpermit to operate an Energy Recovery Facility (ERF) to incinerate* andprocess hazardous waste at a site on Moor Street, Brierley Hill, in the WestMidlands. The application has been made by Clean Power (UK) Ltd.The consultation will open on Friday 23 May 2014 and close on Monday 30June.  You can view the application for free by visiting the below offices: The Environment Agency                  Sentinel House9 Wellington CrescentFradley ParkLichfieldStaffordshireWS13 8RRTel: 03708 506 506Opening times: 9.30am to 4.30pm, Monday to FridayDudley Metropolitan Borough Council Ground Floor Reception4 Ednam RoadDudleyWest Midlands DY1 IHLOpening times: 8.45am – 5.00pm, Monday to FridayIf you wish to view the application at the Environment Agency’s Lichfieldoffice please call ahead to avoid disappointment. You can also request a CDby calling into one of the above offices or by calling the public registerco-ordinator on 01543 404971. CDs are subject to availability.All responses will be reviewed in detail. They will help us to decidewhether to grant the permit and, if we do, what conditions we would need toimpose to adequately protect the environment and human health.Comments on the environmental permit application can be made via thefollowing routes:Permitting Support Centre (EP Team)Environment AgencyQuadrant 299 Parkway AvenueParkway Business ParkSheffield  S9 4WFEmail: psc@environment-agency.gov.uk   Further information about the Clean Power (UK) Ltd proposal is alsoavailable on our website athttps://www.gov.uk/government/publications/clean-power-uk-ltd-proposed-energy-recovery-facility-on-moor-street-brierley-hill-west-midlandsClean Power (UK) Ltd will need to obtain planning permission from DudleyMetropolitan Borough Council before this plant can be built. The planningprocess determines whether the development is an acceptable use of land andconsiders a broad range of matters such as visual impact, need for thedevelopment, traffic and access – all of which does not form part of ourdecision-making process.Yours sincerely David HudsonEnvironment ManagerMidlands – Central Area 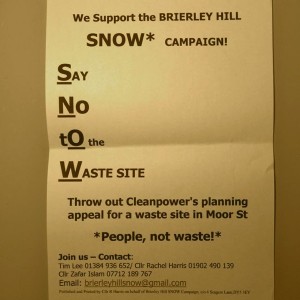 SNOW* is campaigning against plans for a new waste site in Moor Street.

On 17 June, the Public Inquiry, set up to hear Clean Power’s appeal against Dudley Council’s refusal of planning permission for the waste site, begins at the Council House, Dudley.

Everyone interested in the outcome of the Public Inquiry should make time to come along to the meeting on 4th June, to find out how SNOW*s campaign is developing, and the next steps to be taken.